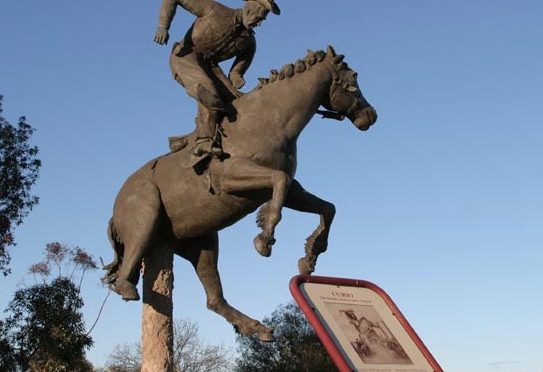 The Marrabel Rodeo evolved from a picnic programme arranged to raise funds for new tennis courts in 1934.

Marrabel Rodeo is the oldest continuos rodeo in Australia. It is classed in the top five rodeos and features in the Longreach Stockman’s Hall of Fame.

Marrabel Rodeo has always been a locally organised event. Local farming families initiated it and those same families (some into their third generation in the Rodeo) are still running it. As it has since its inception, the rodeo continues to raise funds for the local community. All the local sporting clubs, community groups and service clubs are beneficiaries of the Rodeo.

For many years the fame of Marrabel Rodeo rested upon Curio, a brumby bought in a mob in 1945. Unbeaten for eight years, she became the most famous buckjumper in Australia. She was first successfully ridden in 1953 by Alan Woods.

The Queen of buckjumpers was finally retired in 1964, an incredible nineteen years after her debut. She died, aged twenty eight, in 1970.